A recent publication in the Journal of PK/PD presents a modeling framework for predicting clinical drug induced neutropenia from in vitro bone marrow studies and its application to a cell cycle inhibitor.

Neutropenia is one of the most common dose-limiting toxicity associated with anticancer drug therapy. The ability to predict the

probability and severity of neutropenia based on in vitro studies of drugs in early drug development will aid in advancing safe and efficacious compounds to human testing. Toward this end, a physiological model of granulopoiesis and its regulation is presented that includes the bone marrow progenitor cell cycle, allowing for a mechanistic representation of the action of relevant anticancer drugs based on in vitro studies. Model development used data from previously reported tracer kinetic studies of granulocyte disposition in healthy humans to characterize the dynamics of neutrophil margination in the presence of endogenous granulocyte-colony stimulating factor (G-CSF). In addition, data from healthy volunteers following pegfilgrastim and 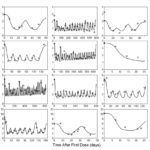 filgrastim were used to quantify the regulatory effects of support G-CSF therapies on granulopoiesis. The model was evaluated for the cell cycle inhibitor palbociclib, using an in vitro system of human bone marrow mononuclear cells to quantify the action of palbociclib on proliferating progenitor cells, including its inhibitory effect on G1 to S phase transition. . The in vitro results were incorporated into the physiological model of granulopoiesis and used to predict the time course of absolute neutrophil count (ANC) and the incidence of neutropenia observed in three previously reported clinical trials of palbociclib. The model was able to predict grade 3 and 4 neutropenia due to palbociclib treatment with 86% accuracy based solely on in vitro data.